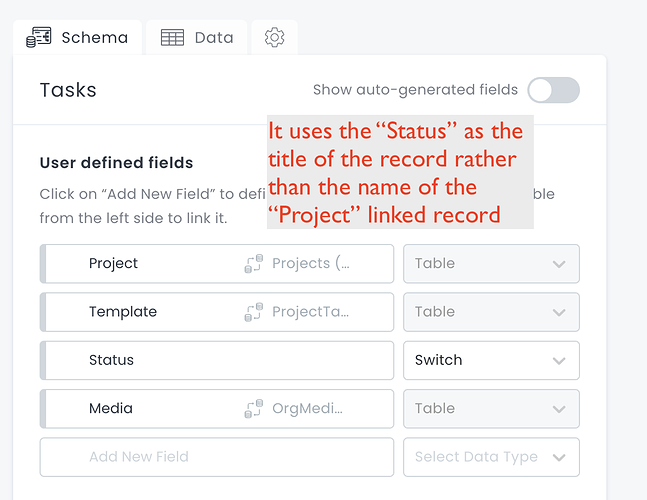 This would be especially helpful with join tables that are intended to inherit their name from another record such as a template. Right now when trying to link records to a table that basically has a couple linked records fields and something like a status or a sorting index, it will show that status or index as the title of the record rather than the name or even index of the linked field that’s in the first spot.

Have you seen it somewhere else?

Any ideas on how you think it could/should work?

To reduce confusion, the title of the record could be “Linked Record Title > Parent Table Name”

Hey Luke - thanks for making this suggestion. I’m trying to understand it a little better. When you are saying Templates and Titles, are you referencing fields/tables specific to your project or system resources in the 8base Console?

So a template would just be a type of table, and Title is what I’m calling the text used in the pillbox in a linked record field in the 8base Console. In my specific example we have Task Templates, Project Templates, and Project Task Reqs which is basically a join table between the two templates with a field to set the task as either “required” or “optional”. Because there is no direct relationship between the two Template tables, when you look at the related table field, it only says “require” or “optional” when what I would rather see is name of linked table. The more I think about the the more I’m realizing there is likely no good way to do this but feel free to prove me wrong

So right now we don’t yet have a great system for naming related records in the console UI. Sorry!

What you can do is drag the input of the field you want to use as the name to the TOP of the inputs list in data builder. It will then be used as the record name. 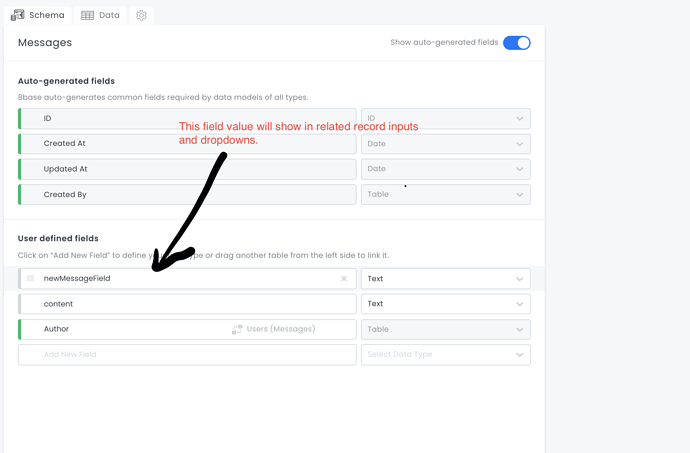 Yeah that’s what I’ve done everywhere else, but when the table is mostly comprised of linked record fields and no useful identifiable data other than the record ID, it can be a little hard to use. Thanks though!