When creating a new row, I use an incremental value to create a short name like ABC-1, ABC-2. Currently, I can read and update the “nextId” field, but it wouldn’t be atomic. Two clients could potentially read the same value, then try to create a new row with a duplicate incremented value.

Maybe one way to do this is to create a custom mutation function / resolver?

@mike_ekim1024 To avoid duplicate incremented values the simplest solution for now is to make that field unique. Please let me know if it helps.

@mike_ekim1024 this might be a good use case for a trigger function run on either before.create or after.create.

I agree with Ilya though that making it a unique field would be a good step 1.

So triggers… they can modify data before being saved, or change data sent after, but I don’t know how that solves atomic increments. The id need to be incremented, then returned to be used.

Even if done in a resolver, I don’t think it would be atomic. How are GraphQL commands converted to ACID / transactions? Ultimately, it would be nice to have auto-increment fields, since they solve all aspects (incrementing, returning new id). Having an “increment” command would be second, such as

Hey @mike_ekim1024! I think I get what you’re saying here but am confused by the link you shared to Hasura.

The Hasura increment is for incrementing a field value, NOT a unique record value. For example, lets say you tracks Likes as an integer field on a record. Hasura’s increment would add +n to that records Likes value.

The problem you’re looking to solve is wanting to increment a value from new records (almost like an INT primary key), correct?

You are correct, those are two different ways to increment a value. Although using two tables, if done through a transaction, could be similar. One table to store the “Next ID” per table, and the other your normal data table. It would require transactions I believe, to be atomic.

For me, I have ABC-1, ABC-2, etc. ID is not human friendly, while integers are (short and memorable).

We have added this task to backlog.

Hi @mike_ekim1024. We just released auto-increment for number field. You could find it in advanced settings 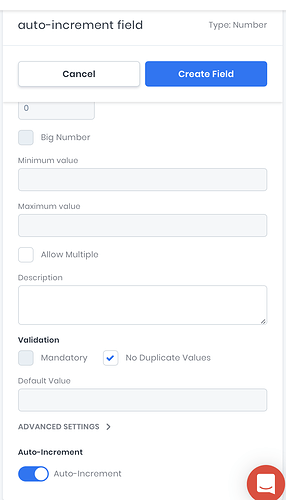 Awesome, this is great news! Thank you and everyone at 8base.